It was pretty hot the early summer weekend we went to Kyiv. It wasn’t humid but still. We weren’t used to it. It was still cool in Warsaw. We wanted to see the city but with Miss H and her friend S in tow we had to be sure we had some good stops along the way.

With so many great playgrounds in the middle of Kyiv, it wasn’t a problem at all.

First there was the set of mosaic playgrounds next to each other, Alice in Wonderland-esque with the Cheshire cat. You can find them on Peizazhna Alley, if you go.

The strip outside the playground included a few multi-colored coffee stands for tired parents. Yea!

Then there was the one on Mikhailovska Square with a castle and dragon. It is near St. Michael’s cathedral and was the perfect stop to get some energy out before we visited the cathedral.

There was also the playground at Volodymyrsky Hill. We stopped for some ice cream and the girls tried out the inflatable slide. It was almost deserted when we were there that morning. A sign of the times? Or maybe just too early for the locals? 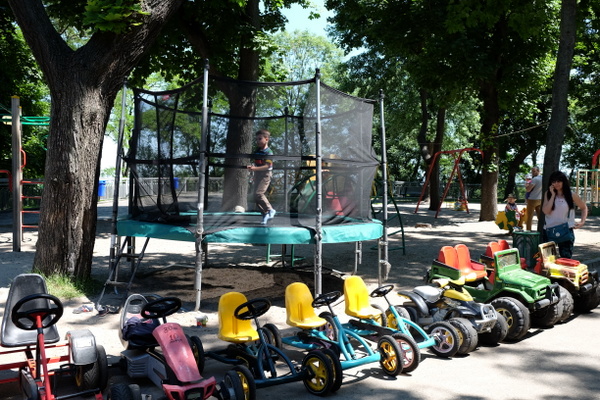 And, when we ran out of playgrounds there was riding horsy. It is good to travel with strong shoulders for that one. 5 and 6 year olds start to get a bit heavy! 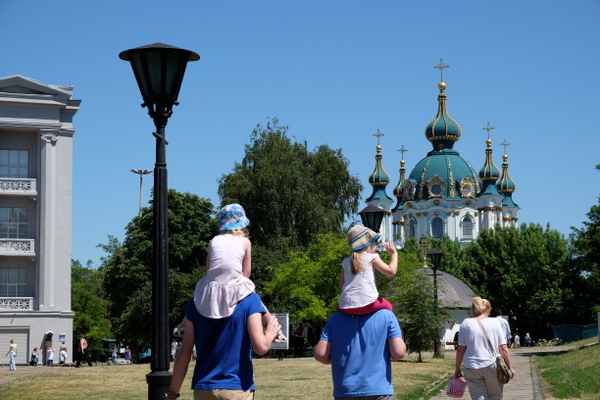 When the horsies got too heavy, it was time to stop for souvenir shopping. Below was Miss H’s choice. S chose a headband in Swedish colors…as she should, being Swedish and all!

Finally, the best way to see a big city in the heat when you’re 5? Make sure the destination is the home of a good friend. Miss H and S are pictured in beautiful dresses and a sweet present provided by N (aka Swede in Kyiv) during our visit to Sweden last summer.

For more on living in Kyiv as an expat, check out Swede in Kyiv.